Hello everyone! It's time for Theatre Thursday and today I've decided to discuss the wonder that is Heathers, and why I'm sad to see it go. 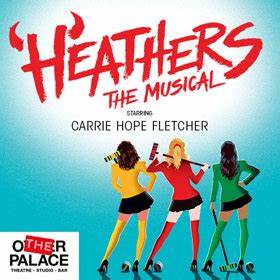 Heathers transferred to The Other Palace and then to The Theatre Royal Haymarket this year, having previously only been seen off-Broadway. Starring Carrie Hope Fletcher and Jamie Muscato, tickets sold like hot cakes, and I was thankfully able to get one for the October showing at TRH. Since then I've managed to snag a further two tickets before its end.

But why? That's the question.

I suppose that, despite its dark demeanour and actually harrowing topic, Heathers truly speaks to what it's like to be a teenager. To constantly be belittled for everything you do, and to desperately want to fit in, even if it means going against your very essence. Then, eventually, realising that you are who you are and you can never be anyone else, nor should you try to be. I may be 26, but the show still spoke to the 14 year old Holly, so unsure of herself, finding hatred festering in the hallowed halls of the place she'd once loved and excelled in. Beyond the whole 'finding a boyfriend' and 'said boyfriend being psychopathic' I really identified with Veronica and her struggles.

Secondly, the music is bopping. The songs push the story forward, speak from the depths of the characters in that very moment of that very scene, but even once you've left the theatre you can't get them out of your head. I found myself quickly scouring streaming services for the Broadway soundtrack, and am now counting down the days until we get the long awaited West End version.

Lastly, it makes you cry. I've always found that the best shows make me cry, and Heathers was no exception. This show tore at my heart strings until they were nothing more than a tangled mess, and I thank it for that. The best shows stay with you, that's what I say.

What are your thoughts on Heathers? Are you hoping it will return? As always feel free to leave a comment below or @ me on Twitter.

Posted by TheArtsShelf at 09:00
Email ThisBlogThis!Share to TwitterShare to FacebookShare to Pinterest
Labels: All Media, Heathers The Musical, Media, Musical Theatre, Theatre Thursday