Hello all! Today for Cover Spotlight Monday I'm looking at a book that's only just been brought to my attention but that I adore so far, and that's Autoboyography by Christina Lauren! The cover is just too cute! 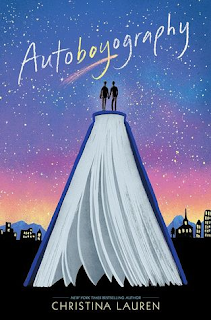 Three years ago, Tanner Scott’s family relocated from California to Utah, a move that nudged the bisexual teen temporarily back into the closet. Now, with one semester of high school to go, and no obstacles between him and out-of-state college freedom, Tanner plans to coast through his remaining classes and clear out of Utah.But when his best friend Autumn dares him to take Provo High’s prestigious Seminar—where honor roll students diligently toil to draft a book in a semester—Tanner can’t resist going against his better judgment and having a go, if only to prove to Autumn how silly the whole thing is. Writing a book in four months sounds simple. Four months is an eternity.It turns out, Tanner is only partly right: four months is a long time. After all, it takes only one second for him to notice Sebastian Brother, the Mormon prodigy who sold his own Seminar novel the year before and who now mentors the class. And it takes less than a month for Tanner to fall completely in love with him.

How adorable is this cover, seriously?! I just love it. First of all I love the image of Tanner and Sebastian silhouetted against the starry night. That image in itself just speaks of love - the sparkle of first love specifically - and beauty. It's just gorgeous.

Secondly I love the shooting star, as if symbolising bringing the two boys' wishes true; the miracle of them finding each other.

Most importantly though I absolutely adore the image of them standing atop the book, looking over the city. In one instance it symbolises the writing seminar that brought them together, almost as if both have climbed up one side each - toiling - to finally reach the other. In the other though I love the position they have over the city, as if symbolising that their love can overcome everything, even their families and/or the opinions of others.

What do you think of the Autoboyography cover? As always feel free to leave a comment below or @ me on Twitter!