Okay, so I read a book recently where one of my favourite characters fell victim to the story's villain and, along with my current obsession with Les Miserables, it got me thinking about my feelings toward character death. Spoilers for Chicago Fire, Supernatural, Les Mis, Torchwood and Criminal Minds below.

Personally I have mixed feelings, so it's definitely a love/hate relationship with the subject. The threat of death often heightens the experience of reading/watching a story. Tension increases. We speculate, talk, investigate. This is usually why TV shows love to end seasons on 'Will everyone make it?' cliffhangers. It generates publicity and promotion, and likely increases ratings for the new season. It's a common tactic. But the outcome itself can have mixed reactions, including backlash, and can also have the opposite effect in losing viewers or readers.

Firstly, the who. Losing a popular character can effect a franchise's (All media types) audience both personally (identification and representation wise) and in terms of enjoying the remaining characters and their dynamic. Two instances for me personally are Chicago Fire (CF) and Criminal Minds (CM) respectively. When CF lost Leslie Shay it was not only sad in the extent of the character no longer being there and the changes it brought to the team dynamic, but it was also a huge loss in that Shay was openly a lesbian and never once changed who she was or showed any hesitation toward being anyone but herself. To lose such a powerful unique character who could have spoken to (and probably did) so many people - the only non heterosexual character in the show - most likely affected many viewers on a personal level too, and could have prevented them from wanting to watch future episodes. CM meanwhile felt a serious change in dynamic upon Emily Prentis' death, resulting in fan backlash and the character's eventual revival; a revival which then ultimately cheapened the show's tension and ability to place its characters in mortal peril. For a procedural this, to me, heralded disaster in the form of boredom. No tension equals no energy.

Secondly, the how and the why. I ran a poll on my Twitter account yesterday asking people for their opinions on the subject. While some chose the 'Totally fine' or 'Noooooo' options as to their feelings, and only a few comments were received, the response largely agreed with my own love/hate situation. 'Depends on the reason' was chosen by more than two thirds, and the comments received agreed that it's the how and why that matters more; 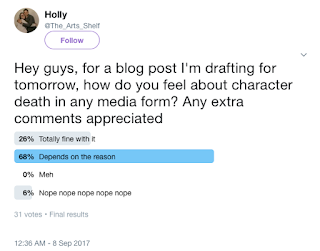 A death for drama's sake can anger audiences, resulting in rather verbal responses and 'resurrection campaigns' which too can harm a franchises overall rating and response. Such was the reaction to Ianto Jones' demise in season three of Torchwood. Though heartbreakingly wonderful in its own right (filming style, music choice, etc) the death itself was cheapened by its lack of necessity. Yes it was a global threat facing the team, the danger immense, but having started as a team of six, losing one in the first episode and two in the previous season, it was apparent that the writers were a little too trigger happy and left the original fans with little to hold onto going into season four. Again, on the personal side of representation, Ianto too (along with Tosh who passed in season 2) was an LGBTQ+ character, and the death could have affected viewers on a personal as well as fan level. In all cases, the reason has to be adequate and necessary, the execution flawless. Ripples must be felt. The characters cannot simply be forgotten. To the fans who love them, a character's death is never simply a plot device and that alone.

The last issue, in my opinion, is frequency. Too many deaths can have the opposite effect to increasing tension, and instead increase predictability and therefore boredom. One of the most obvious examples is in the case of Supernatural. This was a show I used to adore but now have no desire to watch as I felt every finale too predictable. One brother dies, gets resurrected somehow, then the other, and so on. With every threat introduced there was no danger, no tension, because we the audience knew the two beloved brothers are safe. Obviously they always would be (there'd be no show otherwise), but there's no need to make it so obvious.

One last thing of interest is also the media type, as I believe this has impact on audience reaction, because of two reasons.

Going back to Les Mis, this show has a lot of deaths; real emotional sucker punches, and I love them all. Part of this is execution - yes. They're well done, emotional and have an iron-clad reason for being there. But also the character longevity is short anyway. There'd rarely be a spinoff or sequel to a show/musical, so the impact on viewership is diminished. The story is a whole. There's little to 'fall out with' as a result. It's the same with standalone movies too, and single books.

Book and TV series' are a different matter, because there's an expectation for the characters to continue. Which brings in my second point. If a book character dies midway through a trilogy, while the chance they'll reappear in that trilogy is slim, there's always a chance for a spin-off or prequel, if applicable. With TV shows this is less likely and even if a spinoff does happen, if a character died seasons ago that actor could have moved on, making it harder to re-use the character. TV character deaths are therefore, in a way, always harder to handle. Most likely, that's it. Sad, but true.


Anyway, that's all my thoughts expelled for today. I hope you enjoyed the post, and as always do feel free to leave a comment below or @ me on Twitter!