Hi everyone! I'm back with recommendation number 2 in my Spotlight Sunday: Diversity Recs series and this time it's all about Queens of Geek by Jen Wilde! 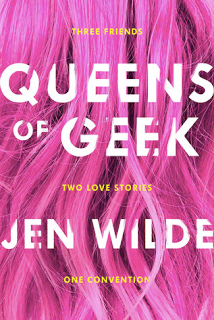 When BFFs Charlie, Taylor and Jamie go to SupaCon, they know it’s going to be a blast. What they don’t expect is for it to change their lives forever.
Charlie likes to stand out. SupaCon is her chance to show fans she’s over her public breakup with co-star, Reese Ryan. When Alyssa Huntington arrives as a surprise guest, it seems Charlie’s long-time crush on her isn’t as one-sided as she thought.While Charlie dodges questions about her personal life, Taylor starts asking questions about her own.
Taylor likes to blend in. Her brain is wired differently, making her fear change. And there’s one thing in her life she knows will never change: her friendship with Jamie—no matter how much she may secretly want it to. But when she hears about the Queen Firestone SupaFan Contest, she starts to rethink her rules on playing it safe.

I absolutely loved this book for so many reasons. The story itself is just so wonderful, especially for someone who very much classes herself as a geek and loves attending comic conventions, but what I really adored was the amazing representation included within.

Charlie is one of our two main characters; out-going, loud, bubbly. She's a Vlogger who's broken into the acting ranks with a home-based (Australia) movie that's made it quite big and brought her to one of the world's biggest comic conventions. There she's all too happy to promote the sequel, until her ex-boyfriend appears. However, things start to look up when long-time crush Alyssa Huntington - another Vlogger - appears. Charlie's bisexual, and her suddenly blooming relationship with Alyssa brings a lot of issues to bear, both regarding her career and not, but what I really loved was how the author didn't shy away from the issues but instead brought them to the light. She discusses and addresses not just the sexuality itself but bi-erasure and homophobia. The issues Charlie and Alyssa face are real, powerful, and passionate, and as a reader who identifies as bisexual I found it hugely welcoming and beautiful.

Taylor meanwhile is the binary opposite of Charlie. Where Charlie lives for the light, Taylor is happiest following her lead. She loves her friends, loves being around them, but she's perfectly happy for them to take the attention. It's in these aspects that I saw a lot of myself in Taylor. She suffers from severe anxiety which makes a lot of things - especially attending the comic convention - very hard for her, and I could 100% understand every emotion she went through. More importantly though Taylor has Aspergers, which is a representation that seems to be rarely found in YA, even today. Though I did not personally understand everything Taylor went through in regards to her Autism, I empathised with her struggle, and found the book to be very informative.

To finish, I also loved the anti-body-shaming messages the story portrays, again with regards to Taylor's storyline. Throughout her entire story which yes does include romance, she never once feels the need to change or adapt herself of her lifestyle, and that is such a wonderful message to portray. Taylor is perfect just the way she is, knows that herself, and it's a message we should all take to heart.

Overall I think this story really is just promoting love and kindness, self-belief and compassion, in all ways, shapes and forms. It's a truly uplifting and inspiring tale, as well as just being fun to read, and one that I really do recommend.

As always, thanks for reading, and I do hope you enjoyed this week's representation. Don't forget to tune in August 27th when another rec will be revealed, and feel free to leave a comment below or @ me on Twitter!