As you all know, last weekend I had the pleasure of attending the Young Adult Literature Convention (YALC) in London. It was a wonderful, but exhausting (Hence why this post is a little late haha) weekend that I thoroughly enjoyed, and now I present to you my wrap up of each Bookerific-Day! 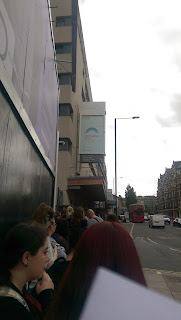 I arrived early to the convention where many other YA fans were already queuing and quickly met the lovely Cora (@Corazzz). I was more shy than I originally planned to be being I was very nervous about the first day and a bit tired from travel, but she was so lovely and it was wonderful to meet her.

When the doors finally opened and we were allowed in I quickly made my way up to the YALC floor and queued for my complimentary tote bag (With the weekend ticket). It was full of lovely bookish goodies, specifically exclusive samplers which I can't wait to read. I then had a quick zoom around the book floor for the exclusive goodies on offer, and was able to pick up two awesome ARCs - There's Someone In Your House by Stephanie Perkins, and Moonrise by Sarah Crossan. I'm super excited to read them both.

The first item on my agenda was Melinda Salisbury's talk with Tom Ellen, Lucy Ivision, Katherine Corr and Elizabeth Corr, which was awesome. Anyone who knows me knows how much I love anything Mel does (It's not even a secret really, ha). I had to leave part way through unfortunately to try and pick up another copy of Someone for Chelley Toy, and to go to my photo in LFCC with Chris Judge, but what I did catch was a wonderful insight into the process of collaboration. 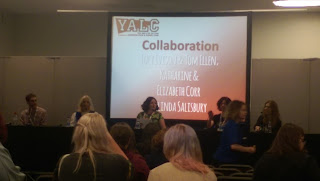 Unfortunately my photo with Chris Judge had been cancelled as the actor wasn't well, which kind of threw me off my game a little. Had I had more thought I should have ran back upstairs to Mel's second panel, but as it was it put my schedule out of whack - so to speak - so I ended up walking aimlessly around LFCC to see what was on offer.

When I finally made it back to the YALC floor it was time for signings! YAY! I met the wonderful Laura Lam and Elizabeth May who were so lovely, and got to speak to Taran Matharu again, who gave me some lovely advice on my own writing (Which I have already been putting into practice!). In between signings I also had another wander around the stalls, picking up some more swag and a few wonderful books that were on sale early from Harper Collins, which were Editing Emma and Daughter of the Burning City, along with a copy of Soldier by Julie Kagawa as it was 3 for £10.

Before I knew it, it was time to see Mel once again, and to also meet Alwyn Hamilton. I'll be honest that I haven't read Rebel of the Sands yet but I'm super excited to, and Alwyn was so amazingly lovely. As always Mel was a gem and gave me a big hug (I may have brought her dinosaur stickers). She also told me the best news regarding the ending of The Scarecrow Queen. I won't say what here, but I mentioned it in a post here with a little ficlet, if you want to take a look. I got samplers of SorrowBook and Floored signed by her, while Floored was also signed by the lovely Sara Barnard who was with Mel.

All day I had been checking my phone for giveaways/competitions (As you do at YALC) and had been so far unlucky, but come the middle of the afternoon, everything changed. Seeing Usborne's giveaway for the awesome sounding The Extinction Trials (Jan 2018) I raced over to their stand, only to see many other people had beaten me to the punch. Luckily, upon seeing how many people had turned up before the password (You had to shout it) had even gone up, one of the staff decided to change the competition to 'first four to like the tweet'. My speedy fingers did not fail me, and I managed to grab an ARC. I'm so so excited to get stuck in.

I was leaving early that first day as we had tickets to the wonderful Les Mis. The show was awesome, I will say that, but I'll have a full review up soon. Before I left however I got two books from the Waterstones shop; Freshers by Tom Ellen and Lucy Ivision as I missed their signing earlier, and Becoming Betty by Eleanor Wood. I can't wait to read them too!

So, overall, here's what I picked up on day one! 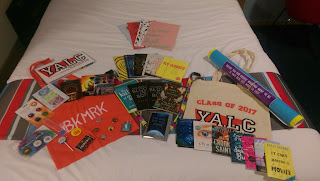 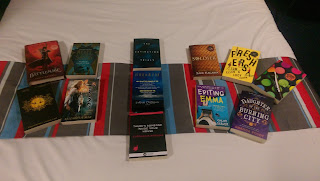 I really hope you enjoyed my day one wrap up. Check out day two here!

Thanks for reading, and as always do feel free to leave a comment below or @ me on Twitter!