Cover Spotlight Monday: There's Someone Inside Your House by Stephanie Perkins.

Hello! Today's cover spotlight features one of my most anticipated releases of this year, a book that I luckily managed to get an ARC of at YALC and am so far really enjoying, and that book is There's Someone Inside Your House by Stephanie Perkins. I absolutely loved Anna and the French Kiss and have been desperate to read this book since I heard about it. 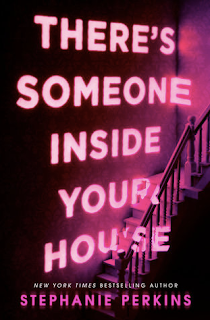 Scream meets YA in this hotly-anticipated new novel from the bestselling author of Anna and the French Kiss.One-by-one, the students of Osborne High are dying in a series of gruesome murders, each with increasing and grotesque flair. As the terror grows closer and the hunt intensifies for the killer, the dark secrets among them must finally be confronted.International bestselling author Stephanie Perkins returns with a fresh take on the classic teen slasher story that’s fun, quick-witted, and completely impossible to put down.


I've never been a big fan of horror films to be honest, but one genre I do love is the Mystery-Thriller, so a horror where you spend the entire film trying to work out who the killer is. Usually they're quite cheesy, but I'm talking Cry Wolf and My Bloody Valentine for example, which I adored. This book seems to me to be that genre but in novel form, and therefore it sounds amazing. The cover was revealed a few weeks back and so, while it's still fairly new, I really wanted to spotlight it in this series.

One thing that I really love about it is how simple it is. There's no over the top design, fancy lettering or special effects like gilded lettering. It's striking in its simplicity, the luminous pink colouring alone enough to draw the audience over. But what I love more about it is how creepy it is in spite of its simplicity also. It quite quickly reminded me of the scenes in horror films where the characters decide to explore an unlit house/room or are woken in the night, and conveniently don't turn the light on; they just use a flashlight instead, allowing any potential killer to hide in the dark. It's cliche, and silly, in the films, we shout at the TV for them to turn the light on, but at the same time it's so effective in heightening emotions and increasing our adrenaline and fear. That's exactly what this cover does. It freaks me out before I've even turned the first page, wondering what could be hiding in the dark, while the pink fluorescent lettering with it, though not red, gives the impression of blood. It's honestly just creepy, and that's why I love it so much.

What are your thoughts on the cover?

As always thanks for reading. I do hope you enjoyed the post. Feel free to leave a comment below or you can always @ me on Twitter!