Hey everyone. Today I'm bringing back Spotlight Sunday and with it I'm starting a new feature called Diversity Recs. Every two weeks I'll be featuring a new YA or MG recommendation that deals with sexuality, gender identity, class, culture, or mental health and wellbeing in a way that deserves to be recognised. I hope you'll enjoy them, and if you'd like to take part and guest post a recommendation or two of your own, feel free to contact me via Twitter or email.

Today I'll be featuring Tash Hearts Tolstoy by Kathryn Ormsbee; a book that I loved and feel personally attached to. 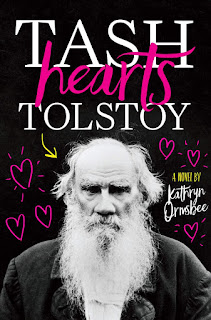 After a shout-out from one of the Internet’s superstar vloggers, Natasha “Tash” Zelenka finds herself and her obscure, amateur web series, Unhappy Families, thrust into the limelight: She’s gone viral.
Her show is a modern adaptation of Anna Karenina—written by Tash’s literary love Count Lev Nikolayevich “Leo” Tolstoy. Tash is a fan of the forty thousand new subscribers, their gushing tweets, and flashy Tumblr GIFs. Not so much the pressure to deliver the best web series ever.And when Unhappy Families is nominated for a Golden Tuba award, Tash’s cyber-flirtation with Thom Causer, a fellow award nominee, suddenly has the potential to become something IRL—if she can figure out how to tell said crush that she’s romantic asexual. Tash wants to enjoy her newfound fame, but will she lose her friends in her rise to the top? What would Tolstoy do?

Tash Hearts Tolstoy features Tash as our MC and wonderfully geeky heroine but one of the best things about Tash is that she's Romantic Asexual. Asexuality is one in the LGBTAIPQ+ spectrum that often gets neglected and ignored, both in representation and real life. Too often is the A attributed to Ally when it actually stands for Asexual/Aromantic/Agender. As someone who identifies as Romantic Asexual, the representation was a joy to find, especially as it was this book that actually allowed me to finally put a name to my feelings.

The representation is dealt with so wonderfully and so positively that I felt I just had to spotlight it as my first Diverse Recs post. Not only do we have Tash, who is completely comfortable within her sexuality and is an utterly positive role model in regards to accepting ourselves, but we also have those around her. Her friends specifically are wonderful in their support, but don't shy away in part of the book from asking the tough questions about Tash's sexuality; the effect of which is to of course educate the reader but I feel to also state that sometimes it is necessary to ask questions, so long as it's with respect.

We of course have the darker side, shall we say, featured in the people who aren't so accepting of Tash's sexuality but this is again done in such a way that is more positive than negative.

Overall Tash Hearts Tolstoy is such a wonderful example of Ace representation and I really do urge you all to read it, whether you identify as Ace or not. It's a wonderful story with a more wonderful, powerful message.

As always I hope you enjoyed my post, and do feel free to leave a comment below or @ me on Twitter. Have any suggestions for recs or want to do a guest post? Let me know!

Don't forget to tune in on Sunday 30th July for my next rec.