Ice Like Fire officially broke me. After everything that happened in Snow Like Ashes I didn't think my heart could be broken any more. I was wrong. Sara Raasch is an evil writer; protect your hearts and be prepared. Spoiler warning for very vague details. 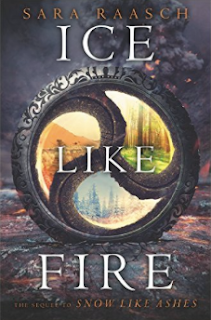 It's been three months since the Winterians were freed and Spring's king, Angra, disappeared—thanks largely to the help of Cordell.
Meira just wants her people to be safe. When Cordellan debt forces the Winterians to dig their mines for payment, they unearth something powerful and possibly dangerous: Primoria's lost chasm of magic. Theron sees this find as an opportunity—with this much magic, the world can finally stand against threats like Angra. But Meira fears the danger the chasm poses—the last time the world had access to so much magic, it spawned the Decay. So when the king of Cordell orders the two on a mission across the kingdoms of Primoria to discover the chasm's secrets, Meira plans on using the trip to garner support to keep the chasm shut and Winter safe—even if it means clashing with Theron. But can she do so without endangering the people she loves?
Mather just wants to be free. The horrors inflicted on the Winterians hang fresh and raw in Jannuari—leaving Winter vulnerable to Cordell's growing oppression. When Meira leaves to search for allies, he decides to take Winter's security into his own hands. Can he rebuild his broken Kingdom and protect them from new threats?
As the web of power and deception is woven tighter, Theron fights for magic, Mather fights for freedom—and Meira starts to wonder if she should be fighting not just for Winter but for the world.

It's a given fact that after the events of Snow Like Ashes our characters were far from okay. Secrets were uncovered, truths were told, and trust was broken, perhaps irreparably. The Children of the Thaw (It's a phrase you'll hear often) may have their freedom, but they don't have their lives. The kingdom of Winter is in disrepair, the crown indebted to Cordell, and its Queen is torn by two lives.

Meira doesn't know who she should be. Her instincts scream Meira the orphan soldier, but Winter needs Queen Meira, leader, diplomat and conduit. Cordell's grip is slowly tightening, more so when the magic chasm of Primoria is uncovered, and Meira knows if she doesn't act all could be lost. The best case is Noam takes Angra's place as Winter's dictator; though at least with less psychosis and magic. Worst case, the decay spawns again. So despite her own reservations, a deep down wish for everything to go back as it was, Meira sets off across Primoria to gather allies and search for a way to keep the chasm shut for good.

But she's not the only one hurting. She's not the only one hiding behind a facade with secrets to keep buried. Mather doesn't know who he is. King? Son? Soldier? The one thing he does know is that he'll do anything to keep Winter safe, even if it means defying Cordell, and his father. Theron believes the chasm could ensure safety and unity across all of Primoria. But securing peace is easier said than done, and the Prince is far more broken from his time with Angra than even he knows.

It is impossible for your heart not to ache for the characters. Every one of them is struggling with some sort of nightmare, both visible and not. Bonds have been shattered, identities ripped away, and the picture Sara Raasch paints is not simple, nor easy. That's what I loved about Ice Like Fire though. It's real. Raasch doesn't mollycoddle or glance over anything. Primoria is real, its landscapes harsh and its wars harsher. Good and evil. Life and death. The balance is an ever fraying tightrope for the characters, where every step could be their last, and any action can irrevocably change their relationships for better or for worse. Life is tough, that's a fact, and as much as I read to escape from reality I also enjoy books that give the sense of real, impending danger. Dark and gritty, Ice Like Fire is no comfort read. It is the story of a broken nation who are trying to fix their home when they can't even fix themselves. It is tense, heart-wrenching, and unrelenting.

Though the story begins slowly with the pace increasing in increments it is still wholly captivating. A good portion deals with travelling to other kingdoms and diplomacy with them, but Raasch's strength - at least in my opinion - is in characters and dialogue. It doesn't matter that a lot of Meira and Theron's journey is dignitary because the pace intensifies, tension building, because of their actions. Their words. The characters push the story forward rather than the plot, which I enjoyed to no end. The characters are so fleshed out, personable, that it's hard not to get attached, and makes any consequences and casualties a much more bitter pill to swallow.

The numerous twists and turns left me shocked, breathless, and teary eyed, so I caution you to watch where and when you read this book. 1am before a job interview or work? Not good. On a crowded train? That's no better. Keep tissues and chocolate to hand, trust me. This book physically hurt.

Betrayal abounds in so many forms, for no-one is safe as darkness threatens all of Primoria. In the fight for power there will always be consequence and sacrifice.

Ice Like Fire is the second book in Sara Raasch's Snow Like Ashes trilogy, and - though I'd give it more if I could - receives a glittering FIVE STARS! Released on October 13th in the US and November 19th in the UK, this riveting series is one not to be missed.