Readers for Refugees: A Show of Humanity

There are some days when you wake up and despair at what the world has become. While politicians earn thousands for simply sitting in their chairs debating, millions of Syrian people are fighting for freedom - and their lives - in trying to cross the borders. Sometimes though your faith in humanity is restored, and today was one of those days.

Approximately 8 hours ago, around 11am this (Thursday) morning, children's author Patrick Ness - deciding his 'angry tweeting does pretty much nothing' - made the move to do something about the crisis. Taking to uk.virginmoneygiving.com/PatrickNess the author said he would match up to £10k of donations from the public, and the response has been overwhelming.

In 8 hours Ness has raised almost 70k and is still going. The further three milestones were matched by fellow authors John Green, Derek Landy and Jojo Moyes. Moyes has already donated her £10k, bringing the total to near £80k, with the others pledging their own later. Shocked by the heartfelt response in such a short time, Ness is continuing to lobby for donations. 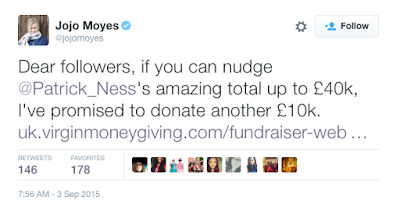 The response shows that there are more people in this country - and over the world - who want to help than there aren't; they simply weren't sure of 'how?'
Ness has now answered the question, becoming the spark that lit the flame so to speak. With donations pouring in, the final total is reaching well over £100k, with Hank Green pledging to match the next £10k. A few very generous people have even donated £10k each themselves! 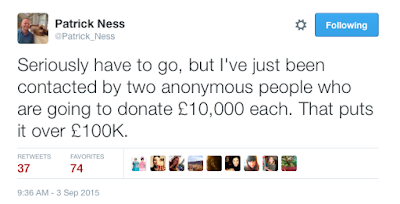 The sheer generosity is astounding and it has really restored my faith in people, as it has for author Holly Bourne.

Dawn O'Porter (Twitter: @hotpatooties) is also building physical funds (food/clothing/shelter) for the Calais refugee camp and you can purchase items from a wish-list (delivered straight to 'Help Calais') here, if you so wish. You can also send parcels directly to them.

I myself have donated to Patrick's cause, and am more than happy to have done so. We're all human after all, aren't we?

UPDATE 7.46pm BST - A group of American YA writers are matching a further £10k for donations between £80k - £90k, however that has already been surpassed by a total (With Jojo Moyes' donation) at the moment of £99,171.48. With their £10k, plus those of Ness/Green/Landy/Green, that makes a current running total of just less than £150k! In 9 hours, that is incredible!

UPDATE 2.41am BST - I should be sleeping now but I'm too excited. The current total is now £133,228.98! I'm not sure how much has been matched yet but that is simply incredible!

*All sources are taken directly from Twitter and uk.virginmoneygiving.com/PatrickNess. They are correct at the time of writing*