Cover Spotlight: Sorcerer to the Crown

I will not be the first, nor the last, to say that I adore a beautiful, well-designed cover. Cover Spotlight was created with the sole intention of highlighting and displaying some of the amazing covers the book world has to offer, and this week's pick is absolutely stunning. Sorcerer to the Crown by Zen Cho. 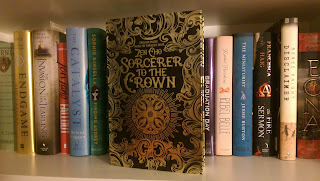 In Regency London, Zacharias Wythe is England's first African Sorcerer Royal. He leads the eminent Royal Society of Unnatural Philosophers, but a malicious faction seeks to remove him by fair means or foul. Meanwhile, the Society is failing its vital duty - to keep stable the levels of magic within His Majesty's lands. The Fairy Court is blocking its supply, straining England's dangerously declining magical stores. And now the government is demanding to use this scarce resource in its war with France.
Ambitious orphan Prunella Gentleman is desperate to escape the school where she's drudged all her life, and a visit by the beleaguered Sorcerer Royal seems the perfect opportunity. For Prunella has just stumbled upon English magic's greatest discovery in centuries - and she intends to make the most of it.
At his wits' end, the last thing Zachariah needs is a female magical prodigy! But together, they might just change the nature of sorcery, in Britain and beyond.

As soon as I read about this book I knew I had to have it. It's no secret that I love great fantasy reads and this book sounded perfect to me; English magic, royalty, philosophy, fairy courts and war. Honestly it sounds like a cross between Northern Lights and Henry V, which excites me to no end.

A discussion of the story will come after reading with my review however, whereas today I am focusing purely on the beauty of this magnificent hardcover. 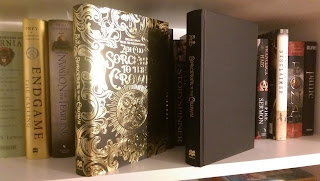 The hardcover itself may be plain black, but the spine features beautiful gold embossing. The colour scheme matches perfectly and the plain inside counters the intricate design of the dust jacket.

The dust jacket itself I could look at forever, it's that pretty. Every inch of the gold design screams magic, which against the black background also hints at mystery. If the blurb hadn't hooked me, the cover on its own certainly would! Sorcerer to the Crown is definitely one of the best looking books I have ever seen.

Do you have a cover you'd like to spotlight? Let me know in the comments below or on Twitter!

Posted by TheArtsShelf at 00:20
Email ThisBlogThis!Share to TwitterShare to FacebookShare to Pinterest
Labels: Books, Bookshelf, Cover Spotlight, Sorcerer to the Crown, Zen Cho