It's not very often, at least for me, that you come across a book set where you live. Okay so I don't exactly live in Liverpool, but it's nearby and pretty much my second home (Waterstones...). The point is when I heard about this book I knew I had to have it, and upon purchasing an early copy at YALC, I have not regretted it since. Minor spoilers ahead. 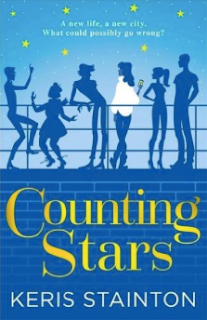 A new life in a new city - would could possibly go wrong . . . ?
When eighteen-year-old Anna leaves school and moves to Liverpool, she feels like her life is finally beginning. She's landed her dream job at a theatre, and she's moving into an exciting (if not slightly run-down) houseshare on a buzzing street lined with shops, bars, and buskers. Best of all, her new flatmates are kind, welcoming and a lot of fun - what more could she ask for?
But her new life is also a little overwhelming. Anna's job quickly falls through, and then she realises that although her new friends are great, they're also a little mixed-up... and it's not long before Anna starts using her blog to talk about her experiences, from the hilarious to the ridiculous to the little-bit-scary. But when Anna spills a bigger secret than she can handle, suddenly the consequences are all too real. She'll have to prove she has the mettle to make it in the big city, or risk losing everything she thinks she wants.

Counting Stars is a very poignant coming of age story that proves that even through the ups and downs of life, everything will work out in the end. With a tight knit group of six friends, Anna included, I found the book to be a little reminiscent of the show Friends. Each character had their own sub-plot within the overall arc, which I found to be very intriguing and which never made for a dull moment. You can even spot a Friends reference, if you're a fan.

The book was heartwarming and funny but still dealt with issues such as sexuality and leaving home in a deep, profound way. It's an enjoyable, light read that still gives you a few things to think about once you've closed that last page.

One aspect I found especially intriguing was Anna's vlogging alter-ego. Though many contemporaries mention I-Pads and Kindles, there are very few that I've come across which tackle internet blogging, and it is the basis of most of the book's conflict.

My only note would be that the resolution when Anna's vlogging is outed felt a little neat. That being said, it did not detract from the story at all and I believe that the only reason why I think this is because the blurb makes it sound a lot more consequential. I'll admit that one of my flaws is taking a blurb word for word. For that reason I still give the book five shiny STARS (Too cheesy?)!

The blurb I give four ;)

Big congratulations to the wonderful Keris Stainton, my fellow northerner, for a fabulous book that has - truth be told - left me hankering for a sequel!

I urge everyone to buy it (*Cough* Signed copies in Liverpool *Cough*); just don't take the blurb word for word, as I did.