A weekly feature created at Breaking the Spine, Waiting on Wednesday features upcoming releases that bloggers are excited about.  You can find out more here.

My pick for this week is Sara Raasch's Ice Like Fire. 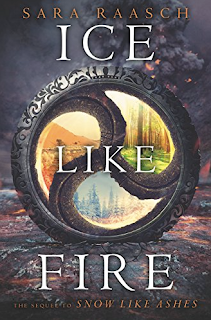 It's been three months since the Winterians were freed and Spring's king, Angra, disappeared—thanks largely to the help of Cordell.
Meira just wants her people to be safe. When Cordellan debt forces the Winterians to dig their mines for payment, they unearth something powerful and possibly dangerous: Primoria's lost chasm of magic. Theron sees this find as an opportunity—with this much magic, the world can finally stand against threats like Angra. But Meira fears the danger the chasm poses—the last time the world had access to so much magic, it spawned the Decay. So when the king of Cordell orders the two on a mission across the kingdoms of Primoria to discover the chasm's secrets, Meira plans on using the trip to garner support to keep the chasm shut and Winter safe—even if it means clashing with Theron. But can she do so without endangering the people she loves?
Mather just wants to be free. The horrors inflicted on the Winterians hang fresh and raw in Jannuari—leaving Winter vulnerable to Cordell's growing oppression. When Meira leaves to search for allies, he decides to take Winter's security into his own hands. Can he rebuild his broken Kingdom and protect them from new threats?
As the web of power and deception is woven tighter, Theron fights for magic, Mather fights for freedom—and Meira starts to wonder if she should be fighting not just for Winter but for the world.

It may sound cliche, but it's probably not possible for me to describe how excited I am for this book in simple words. Squeeling, dancing and bounding around the room would probably be more accurate, but I'm going to try.

Snow Like Ashes, for me, was one of the greatest books of 2014. The perfect mix of fantasy and drama, Raasch told a story that hooked me from the beginning and would not let go until I was finished. Meira is a brilliant MC, bringing an intriguing mix of vulnerability - a need to belong - and raw fortitude that personally made me desperate to see her succeed.

Mather too was compelling. You can feel his love for Meira and yet his need to do right by his people, even if it forsakes his heart, and his genuine despair when he realises his life is a lie; he is no longer the royalty he'd been raised to believe, the title instead belonging to Meira. It's quite possible to think that Mather had always wished his life to be a lie, so he could be free to love the girl he could only call 'friend', but when it happens not only is he shocked to the very core by the lie itself, he is shocked by the truth too. She still can never be his.

But I do believe my heart lay with Theron. So unlike his father he seems to be able to break some of the shell surrounding Meira, and in turn she realises he is not the spoilt royal his exterior may show. Their moments, though not many, were so touching and sweet that I really cannot wait for ILF simply so I can get more Meiron goodness.

Snow Like Ashes was simply perfect, and just looking at the cover for Ice Like Fire makes me want to hold it in my hands; now.

Sadly, unless someone magically brings me an ARC which I know is unlikely, I will have to wait until November 19th 2015 to find out what happens next.

What are some upcoming releases that you're excited for? Let me know in the comments below or on Twitter.