Cover Spotlight is a new weekly feature here on The Arts Shelf that highlights some of literature’s best covers.

I’m so close to finishing Remix and it’s just one of those books that you know is going to stay with you. Non Pratt has such a way with words that you don’t simply get a generic contemporary novel about a girl – in this case two – who falls for someone they shouldn’t, or has a bad break-up. Instead we’re given a rich ensemble cast that populates a story about how the relationships of these two girls affects their friendship; and that’s something I struggle to see, even in YA. Don’t get me wrong, I love soppy romance stories, but it’s refreshing to read something new, told in a constantly switching POV between Kaz and Ruby.

What drew me to buy the book however was not what I’d heard about the story or what I knew about the author. They were of course factors, but in a store filled with hundreds of different books, there’s a lot of competition when it comes to standing out and being bought. What actually drew me to the book was the cover. 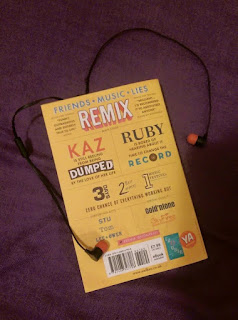 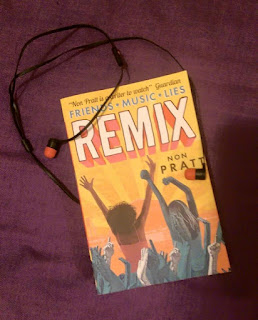 For one, yellow is not a typical book cover colour, and the sheer luminosity of the front cover – yellow, orange and fluorescent pink – is enough to capture anyone’s eye. The design lends itself as being a book about a music festival, complete with the raised hands of festival goers in a contrasting blue tone.

The font and layout of the front cover imitates a music poster, while the back is artistically designed to look like a festival leaflet complete with lists of ‘who’s on what stage?’. The whole jacket is far from plain, utilising multiple fonts and highlighting certain words with the use of different colours and images. At brief glance it looks like a festival advertisement rather than a book, and that’s its Unique Selling Point (USP); the reason why people will look. The cover isn’t simply beautiful or artistic, it’s a very clever marketing scheme.

But the element I love the most, having read 248 out of 300 pages, is the way main characters Kaz and Ruby are displayed on the front. Very simply, the image of the two girls lets anyone know with just a quick glance who the main characters are, but more deeply it emphasises their state of mind at the festival.  On page 181, Ruby says ‘… all the colour’s drained out of my mood – and as I turn greyer, Kaz grows brighter’. So the cover isn’t simply emphasising the location, the background, of the book. It isn’t simply attracting us to buy it. The cover is highlighting – forshadowing – the story; telling us that, in essence, the story is about Ruby losing herself, while Kaz finds herself. It emphasises a suffering friendship, and that this is the dramatic point for which everything else revolves around. This isn’t a story about a boy and a girl.

It’s about two girls, a friendship, and how everything can so easily fall apart in such a short time.

Do you have a cover you want to spotlight? Let me know in the comments below or on Twitter.