Waiting on Wednesday - The Invasion of the Tearling by Erika Johansen

A weekly feature created at Breaking the Spine, Waiting on Wednesday features upcoming releases that bloggers are excited about.  You can find out more here.

My pick for this week is Erika Johansen's The Invasion of the Tearling. 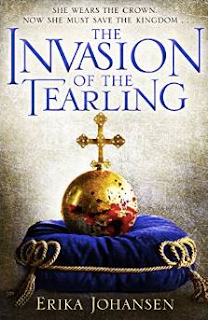 With each passing day, Kelsea Glynn is growing into her new responsibilities as Queen of the Tearling. By stopping the shipments of slaves to the neighbouring kingdom of Mortmesne, she crossed the Red Queen, a brutal ruler whose power derives from dark magic, who is sending her fearsome army into the Tearling to take what is hers. And nothing can stop the invasion.
But as the Mort army draws ever closer, Kelsea develops a mysterious connection to a time before the Crossing, and she finds herself relying on a strange and possibly dangerous ally: a woman named Lily, fighting for her life in a world where being female can feel like a crime. The fate of the Tearling – and that of Kelsea’s own soul – may rest with Lily and her story, but Kelsea may not have enough time to find out.
In this dazzling sequel to her bestselling debut The Queen of the Tearling, Erika Johansen brings back favourite characters, including the Mace and the Red Queen, and introduces unforgettable new players, adding exciting layers to her multidimensional tale of magic, mystery and a fierce young heroine.

Releasing on 16th July 2015, I cannot express how excited I am for this book. I'm out at YALC on the 18th but a two hour train ride there and back is the perfect time to read the sequel to one of my favourite books of 2014. If I remember rightly I read through the first book in around 3 days, it was that amazing. A mix of unique characters, a pace that didn't let up, and a beautiful crafted world, I could not stop reading until I was done. The story had so many twists and turns that by the end I was left reeling, and waiting anxiously for the next instalment. Now that it's so close to July I am counting down the days, and so The Invasion of the Tearling was an obvious choice for my first Waiting on Wednesday post.

What are some upcoming releases that you're excited for? Let me know in the comments below or on Twitter.

Twitter: @The_Arts_Shelf
Posted by TheArtsShelf at 20:42
Email ThisBlogThis!Share to TwitterShare to FacebookShare to Pinterest
Labels: Bookshelf, Erika Johansen, The Invasion of the Tearling, The Queen of the Tearling, Waiting on Wednesday