"And I was his delight and he was mine."

This book was my delight. What can I say except that when it comes to fairytale retellings, this book is absolute perfection. 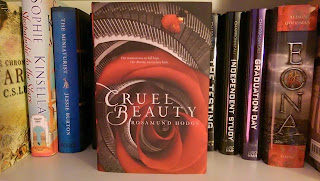 As a huge fan of Beauty and the Beast, I did not hesitate in adding this book to both my basket and May TBR, but I didn't expect it to be quite this good. That's not to say I expected it to be bad, of course not, I simply didn't expect it to take my breath away and immediately become one of my all time favourite books.

However love blossoms, it develops, and I will admit that I was disappointed by the slow pace and lack of action when I first began reading. I felt a little as though I was reading a history of the world or a complex explanation of Hermetics (the story's magic system), rather than a story of love and honour. It wasn't long though before I began to admire the slow pace and beautiful, almost poetic, text. Just as Nyx slowly falls in love with Ignifex and warms his heart, the readers are invited to slowly fall for the characters also.

In contrast to the original tale however, the characters we come to like are selfish, their hearts blackened by hate; though both for different reasons. Nyx's family have pushed her aside all her life in favour of her sister, knowing that she would be the one to die while Astraia would live. This neglect has tainted Nyx, and though she knows her duty and is bound to honour it - to kill Ignifex and free the land - she can't help loving the one person who has loved her without asking anything in return. She can't help but want to be selfish, and simply live her life with Ignifex in blissful ignorance. That was something that I loved about the character though. I loved that she wasn't our 'typical Belle', that she was tainted. It was refreshing to have a hero that wasn't so far removed from the villain.

"We'll both be foolish and vicious and cruel. We will never be safe with each other."

As a big fan of ABC's Once Upon a Time, I found Ignifex to be a lot like Robert Carlyle's Rumplestiltskin (Another version of The Beast). He makes deals to suit his purpose and feels no remorse for the consequences that fall upon his victims. After all, 'Magic always comes with a price' as Rumplestiltskin says. Yet against all odds he falls for Nyx and lets her change him from a beast to something that could possibly be called a man; just as Rumple falls for Emilie De Ravin's Belle. The similarities end there though, with Hodge's tale being refreshing and original, but the likeness of Ignifex and Rumple intrigued and excited me. Just as I feel for Rumple, I felt for Ignifex too, wanting him and Nyx to get their happy ending. I enjoyed his snarky remarks and charming smirk. I loved the way he played with Nyx, finding her feisty attitude and desperation to kill him amusing. The two characters play well with each other throughout the entire story, and it was a joy to read.

I'm finding it incredibly hard to be critical of a book that I didn't want to end, so I'm not going to be. It's a fantastic tale that anyone who loves YA, fantasy, and fairytale retellings should read. I give it a solid 5* rating. In my opinion, it was simply perfection.

Crimson Bound, Hodge's brand new retelling of Little Red Riding Hood, was just released on May 5th in the US, by Balzer and Bray.